Did you know that the strain of a probiotic determines its effect? And that most probiotic supplements don’t tell you what strain they contain? In order to take the best probiotic for you, you need to understand which strain will give you the benefits you’re looking for.

What is a Probiotic?

No doubt you’ve heard all the hype about probiotics.

“Probiotics will heal your gut!”

Before we jump into that, let’s quickly define probiotics:

Probiotics, at their most basic definition, are “live microorganisms which when consumed in adequate amounts as part of food confer a health benefit on the host” (according to the World Health Organization).

What is a Probiotic Strain?

Probiotic strains are where things get a bit more complicated.

You see, most of us are used to seeing probiotic names listed on labels with two parts to the name.

For example, you might see “Lactobacillus rhamnosus” on a supplement label and nothing more than that. Looks pretty legit, right? It’s a complicated name that most of us probably wouldn’t pronounce correctly.

But the truth is that it’s missing the most important part of its name — its strain.

For example, Lactobacillus rhamnosus GG is a highly-studied strain that has a whole host of benefits, including preventing antibiotic-associated diarrhea, C.difficile treatment, and promoting intestinal barrier function.

On the other hand, Lactobacillus rhamnosus PB01 is mostly studied for urogenital infections in women, sperm motility, and pain.

So if you’re looking for a probiotic to prevent diarrhea while you’re on an antibiotic, should you really be taking a probiotic that has mostly been studied to help get rid of a urinary infection or improve sperm motility? Absolutely not! 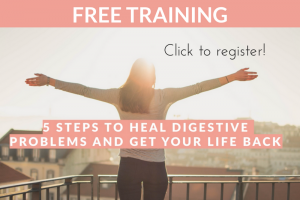 When it comes to probiotics, you generally need to look at 3 different parts of the name.

The first part (e.g. Lactobacillus) is the genus.

The second part (e.g. rhamnosus) is the species.

When looking at a probiotic supplement you’re about to buy or take, you must make sure that it lists the strain, not just the genus and species.

Without knowing the strain of the probiotic you’re taking, it’s impossible to know the effect that a probiotic might have on your health.

And when you’re spending your hard-earned money, don’t you want to know exactly what you’re paying for?

Makes a big difference, doesn’t it?

Remember: the best probiotic for you won’t be the same for someone else.

Choosing the Best Probiotic Supplement for You

In order to pick the best probiotic supplement for yourself, you now know that you need to look for the strain of probiotic that your supplement contains.

Now, I hope that these supplement companies are just ignorant instead of blatantly trying to dupe their customers.

But the truth is that you need the strain information in order to make a decision about the best probiotic supplement for yourself. And if the probiotic company that you’re trying to buy from doesn’t list it and won’t tell you, chances are that it’s a poorly-studied strain, or doesn’t do what they’re advertising it does.

If you’re looking at a probiotic supplement and the strain isn’t listed, you can contact the company and ask what strain they’re using. But don’t be surprised if they tell you that their probiotic mixture is “proprietary” (i.e. they don’t want to tell you what’s in it).

If that’s the case, I recommend steering clear. They either don’t want you to know that they’re using a poorly-researched strain of probiotics or they’re simply ignorant to the fact that the strain of probiotic really matters and determines the benefit that you’ll receive as the consumer. I usually want to give these companies the benefit of the doubt, but honestly, if you’re making a probiotic supplement you should know this stuff is important.

Let’s go through an example.

Take a look at the supplement facts for Klaire Labs Therbiotic Complete supplement below: 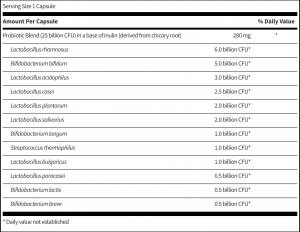 You’ll notice that there are only two words for each type of bacteria, indicating that we’re getting to the species level, not the strain level.

I reached out to Klaire Labs to see if they’d tell me the strains included but — surprise! — that’s “proprietary information”:

I can only hope that Klaire Labs will get their act together if they want to serve their customers well.

On the other hand, take a look at the label for Florastor:

We are clearly getting to the strain level by going beyond “Saccharomyces boulardii” and to “Saccharomyces boulardii CNCM I-745”. They did a great job by actually putting it on the label so you don’t even have to contact the company to see exactly what strain you’re getting. (P.S. this is a well-researched strain that I highly recommend, especially for preventing antibiotic-associated diarrhea.)

Another supplement I like and use a lot, Culturelle, also lists their strain on the label (though they do so in a somewhat confusing way):

Here we see “Lactobacillus GG” written, so while they’ve given us the strain (“GG”), they don’t include the species level. I am guessing this is for space concerns on the label, but I wish they’d include all three parts of the name so that people don’t get confused.

However, you can rest assured that they are actually giving you the strain name. Sometimes you might also see strains listed with their copyrighted name, like “LGG®” (that’s the copyrighted name for Lactobacillus rhamnosus GG).

The Best Probiotic Supplements that Actually Tell You Their Strains:

I realize that after learning this, you might feel a bit overwhelmed at the idea of finding a probiotic supplement that actually lists its strains and those strains are appropriate for you.

So here’s a list of the best probiotic supplements in my book (in no particular order), along with a few reasons why I might use them.

Someday I hope to add my own supplement to this list because, truly, we need more choices for quality probiotic supplements. Might have to step up and take things into my own hands!

Full disclosure, this is actually my company! I started Gut Power Drinks to make the tastiest way to get prebiotics & probiotics into your diet.

The probiotic strain, Bacillus coagulans GBI-30 6086, has been researched in those with digestive problems like bloating, bowel changes, and abdominal pain.

It’s a great strain to support both digestive and immune health when combined with a healthy diet and lifestyle! 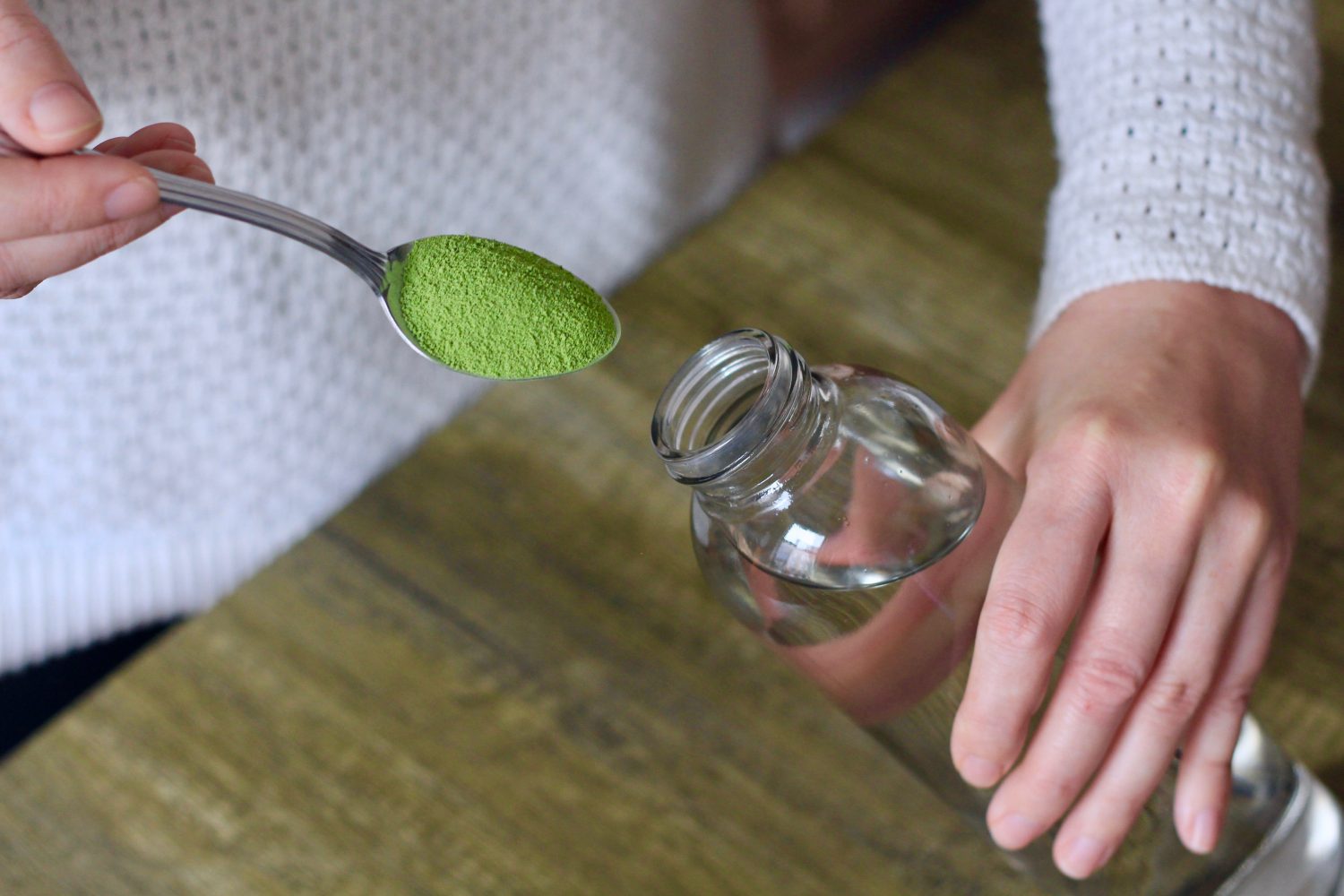 I use Culturelle in clients who have IBS-like symptoms (gas, bloating, diarrhea, constipation, abdominal pain, etc), as well as those who are currently on antibiotics or those who have dysbiosis.

I use Florastor with clients who are taking antibiotics, or who have diarrhea, SIBO, giardia, candida, blastocystis hominis or H.pylori. It’s a favorite of mine!

I use Now Foods Clinical GI Probiotic in those who have dysbiosis or who I think have slow motility. It is also useful for metabolic issues and helps your immune system.

Quick note about some formulations with multiple strains (including this one): Take a look at the label below and you’ll see that the supplement contains a mix of strains, but the label just says there is a total of 20 billion CFUs (how they measure the amount of bacteria). This does not tell us how much of each particular strain there is, and we want to know that there are at least 1 billion CFUs per strain to get a beneficial effect.

Given that the supplement label is not clear enough to tell us if each of these strains is present above 1 billion CFUs, I would only use this supplement if you’re looking to get the HN019 strain and consider all other probiotics “bonuses” since it’s impossible to know how much you’re getting.

Metagenics UltraFlora Synergy is also great for preventing antibiotic-associated diarrhea, so it’s a good choice if you’re on antibiotics.

It’s also useful in dealing with bloating and abdominal pain, as well as improving the balance of your gut microbiome. In addition to this, is great for your metabolic system and insulin sensitivity.

Note: This is an example of a multi-strain probiotic that tells you how much of each strain there is, unlike the Clinical GI probiotic above. We see on the label that there are a total of 15 billion CFUs and it also tells us that it is a 50:50 split between the two strains present. 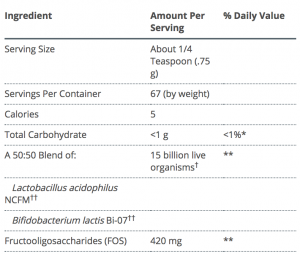 Note: This is another example of a multi-strain probiotic that tells you how many CFUs are present for each strain. In fact, I like this label the best since it lists the exact number of CFUs for each individual strain.

Visbiome is a highly-researched strain blend that is very potent. This probiotic supplement can be used for IBS, ulcerative colitis, antibiotic-associated diarrhea and more.

As you can see, knowing the particular strain of probiotic that you’re taking is extremely important. Without knowing it, you have absolutely no idea what benefits (or potential detriments) that strain might offer.

Probiotic effects are strain-specific meaning that one strain of a species might have completely different effects on a person than another strain.

Because of this, it is vital that you know what strains you’re buying and also that the strain you’re buying has the effect that you’re looking to get! This allows you to choose the best probiotic supplement for you.

Without knowing this, you might be throwing money down the drain by taking expensive supplements that haven’t been well-researched and don’t give you the results you’re looking for.

So consider this your PSA: Don’t buy probiotics without knowing the strain you’re buying!

Catch up on the latest podcast

No images available at the moment

The Best Probiotic for BV: BV Treatment Over the Counter That Works

Prebiotics and Probiotics…What is a Prebiotic vs Probiotic?
Scroll to top
Sign up and get 15% off your first Gut Power Drinks order